At its core, Slavyanka seeks to entertain, inform, excite and educate listeners in the haunting harmonies of the Orthodox Church and Eastern European cultures. This a cappella chorus of men and women gather every Thursday evening to learn, rehearse and sing the sacred and secular music of Russia and Eastern Europe and the Balkans. "... Enjoy. 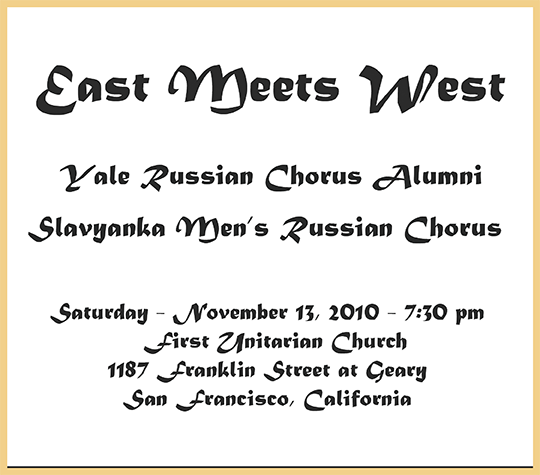 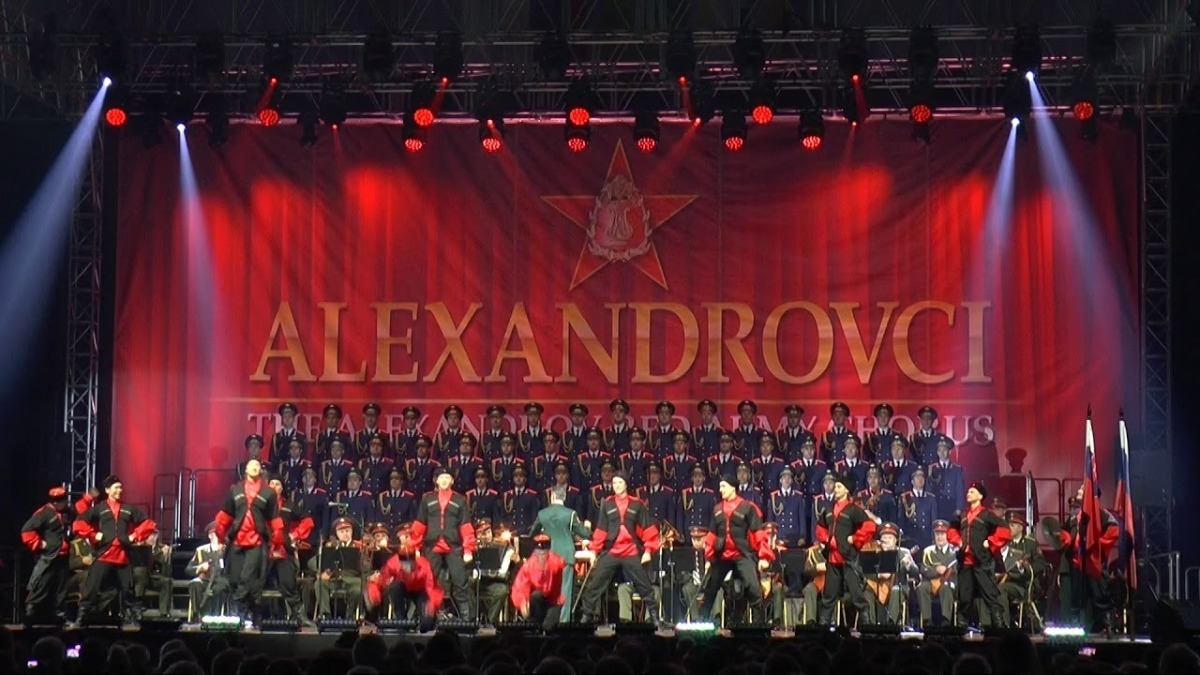 East Meets West, a historical concert sponsored by the Slavyanka Men's Russian Chorus in 2010, celebrates a thousand years of Russian choral singing – and over fifty years of extraordinary political and cultural activism by two unusual American choirs. The Yale Russian Chorus was born in the early days of the Cold War in 1953, when the Yale University Russian Club invited Denis Mickiewicz, a Latvian-born Music School student, to give a talk on Russian choral music. Mickiewicz breezed in with some mimeographed folk songs, a guitar, and two bottles of vodka, and announced to the somewhat startled group, “It’s better to sing than to talk!” Soon, weekly meetings of the Russian Club became rehearsals of the Yale Russian Chorus(YRC). In 1958, with the signing of a new US-USSR cultural exchange agreement, the YRC became the first American group to visit the Soviet Union as a private initiative. Singing on street corners, in churches, and even in the fabled halls of the Moscow Conservatory, the American chorus attracted enthusiastic and deeply appreciative crowds, who were amazed to hear liturgical and folk music that had not been permitted there for years. About these very early efforts at citizen diplomacy, Averell Harriman remarked, “ I think that the Yale Russian Chorus is one of the most imaginative and penetrating programs of cultural exchange that has been undertaken by government or by private initiative.”
Over the next five decades, the YRC made 14 more tours to the U.S.S.R. and to Europe; sang at the White House three times; sang on Soviet radio and television; and even sang at a moving requiem at the Berlin Wall for a young East German shot while trying to escape. At the same time, it was winning
international choral competitions, making 14 recordings -- and during the Cold War period, steadily introducing a whole generation of Americans to the cultural and musical heritage of the Russian people.
In 1979, two Yale Russian Chorus alumni helped found Slavyanka, the San Francisco Bay Area Men’s Slavic Chorus, known today as the Slavyanka Russian Chorus.
Вечная память! Vechnaya Pamyat!
Eternal memory!

To honor the memory of the 64 members of the famed Alexandrov Ensemble who died in a tragic plane crash while en route to a performance, Slavyanka sponsored a special memorial concert in San Francisco, with four local choirs performing. This free, very moving concert was attended by some 700 people (including the Russian Consul General) and was featured on Russian television.
On Friday, February 3rd 2017 at 8pm, four choirs from the Bay Area joined to present a concert of choral music to honor the following people who perished in a plane crash in the Black Sea last December:
Participating choirs included:
The program included sacred music, and secular music in the spirit of the Red Army Chorus.
The concert was open to the public and was free of charge.
The loss of the Alexandrov Ensemble was a great national tragedy for the Russian people, who took immense pride in this chorus, one of the most well known and beloved choruses in Russia’s great choral tradition. This loss was also felt deeply by many Americans, who have fond memories of their recordings and performances. Even as early as the 1950’s, their sound floated over the walls that were between our countries for many years, giving to many Americans their first exposure to the beauty and vitality of Russian music and Russian culture.
This concert was offered in deep respect and gratitude; a thank you from American singers and American people, for all that this choir has given to the world over nine decades. May their music and their spirit be remembered for many years.